A latest study led by BGI-Research scientists revealed that the organs and systems in a human may have different ages and the 'clocks' within an individual's body vary widely based on factors including genetics and lifestyles.

The study, published on March 8 in the journal Cell Reports, was also participated by scientists and researchers from institutions including Peking University, the Affiliated Hospital of Hebei University, and National University of Singapore.

"Our study used approaches that can help improve our understanding of aging and – more importantly – could be used some day in real healthcare practice," said co-corresponding author Dr. Xun Xu, Director of BGI-Research.

"After proper replication and validation studies, some genetic pathways could be developed as anti-aging drug targets," he added. "This is one of our future directions for research."

The study showed evidences that organs and systems are aging at different paces, and different tissues or even cells are at different stages of life circle. There might be multiple 'clocks' within the whole-body system.

Instead of constructing one biological age, researchers created nine aging indexes from Renal to Metabolomics, which indicate certain factors. The study suggested that classifying features to construct organ/system-specific biological age could gain more specific power in terms of predicting organ-related disease mortality. For example, cardiovascular disease caused mortality could be more accurately predicted by the cardiovascular aging index, which performs better than the liver or renal aging indexes. 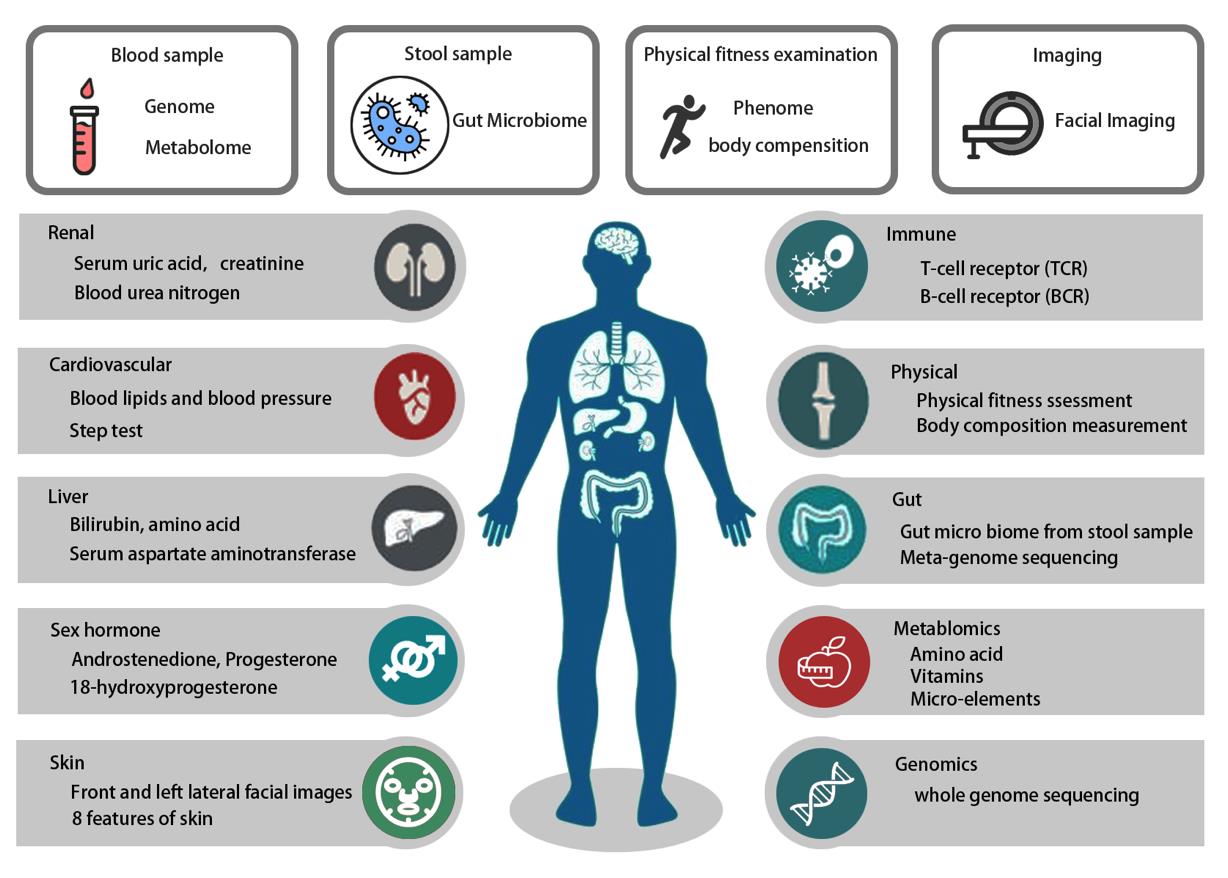 Research indexes and approaches for this study

The researchers also discovered that biological ages of different organs and systems have diverse correlations, and not all are expected. For example, the gut microbiota influences the actions of a range of xenobiotics, in both beneficial and potentially harmful ways. Higher diversity of gut microbiota is a sign of a younger gut, but more diverse gut microbiota could impact xenobiotics, thus bringing a much heavier load to the kidney.

The study paid more attention on choosing approaches which could improve our understanding of aging, and more importantly, which could be used in real healthcare practice. Therefore, the researchers have chosen biomarkers that could be identified from blood and stool samples plus some measurements from routine body check-up.

"This research has demonstrated how to use multi-omics data for constructing biological ages of organs and systems, and also showed several applications of organs/systems' biological ages," says Dr. Xun Xu.

Next step, BGI researchers are considering upgrading the resolution into single cell level. BGI has developed a new technology, Stereomics, which offers a powerful single cell spatially resolved transcriptomic strategy. The new technology enables scientists to study the programmed aging in a single cell. Variation among the cell population is the key to understand how the life works.

The researchers recruited 4,066 volunteers living in the Shenzhen area for the study to supply blood and stool samples and facial skin images and to undergo physical fitness examinations. The volunteers were between the ages of 20 and 45 years; 52% were female and 48% were male.

The researchers then developed an aging-rate index that could be used to correlate different bodily systems with each other. Based on their findings, they classified the volunteers either as aging faster or aging slower than their chronological age.