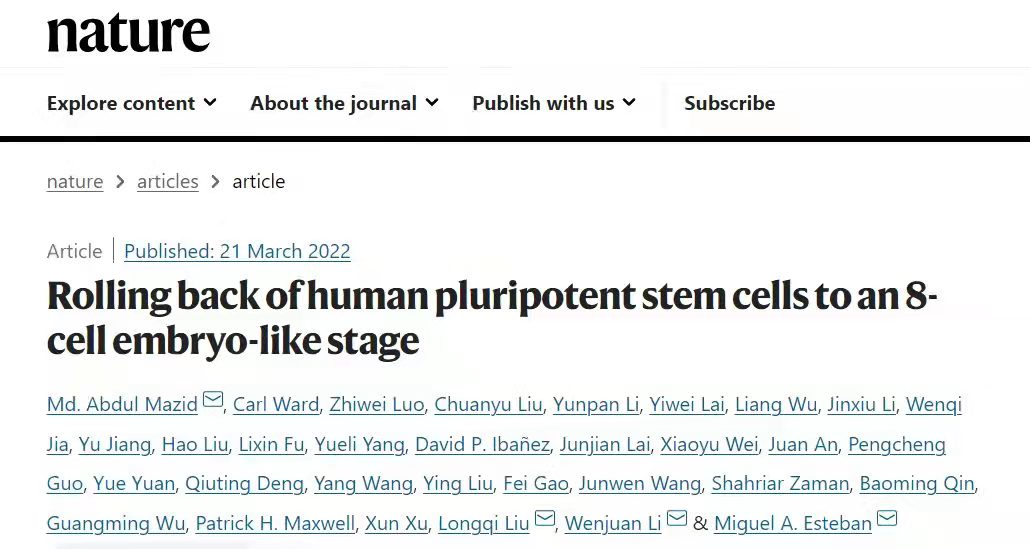 Shenzhen, March 22, 2022: In a world-first, scientists from BGI-Research, Chinese Academy of Sciences, and a group of partners published a study in Nature, announcing the discovery of a transgene-free, rapid, and controllable method to convert pluripotent stem-cells into bona fide 8-cell totipotent embryo-like cells, paving the way for advances in organ regeneration and synthetic biology.

BGI researchers, together with an international team from China, Bangladesh, and the UK, used BGI’s advanced single-cell sequencing technologies to help convert pluripotent stem cells, or an “adult” version of early embryonic cells, into a more “juvenile” version of cells that capture human zygotic genome activation and retain all lineage with developmental potential.

These cells could be used in regenerative medicine in the future to regenerate human organs that have become diseased and reduce the world’s reliance on organ donation. They can also be used to generate artificial blastocysts or blastoids. In addition, they will be useful for studying human embryonic development, helping to treat early developmental-related diseases and also prevent pregnancy loss.

While the technology to convert pluripotent stem cells into inner cell mass-like cells inside the blastocyst has existed for some time, this study is the first time researchers established methods to convert pluripotent stem cells to a bona fide earlier stage in the cycle of human development that matches the 8-cell embryo, which will help to expand understanding of early human embryonic development. Crucially, the researchers were able to then demonstrate that the converted cells could create placental cells in vivo– the first time this has been done.

“Totipotent 8-cell stage embryo-like cells recreate the embryonic state of a fertilized egg after only 3 divisions. Compared to the reported pluripotent stem cells, these cells can not only differentiate into placental tissue, but also potentially develop into more mature organs, bringing good news to the millions of patients in need of organ transplants around the world, " said the corresponding authors of the paper, Professor Miguel A. Esteban, Dr. Md. Abdul Mazid and Dr. Li Wenjuan from the Chinese Academy of Sciences.

“This breakthrough is also a perfect example of the combination of regenerative medicine and single-cell sequencing technology," said Dr. Liu Longqi of BGI-Research, another corresponding author of the paper. "Through large-scale single-cell multi-omics profiling, the efficient and precise identification of cells or tissues obtained in vitro or in vivo by stem cell technologies will greatly accelerate researches on regenerative medicine.”

Cells at this early stage of development can be described as ‘totipotent’, meaning they have the potential to create all type of early embryonic cells, which in turn create the tissues and organs necessary for development. The research builds on previous work with pluripotent stem cells at the blastocyst stage, a point at which cells have the potential to create a more limited range of different cells and tissues.

The international team behind the research took pluripotent stem cells and treated them with a chemical cocktail to create the 8-cell embryo-like cells. Among other experiments, these cells were sorted and injected into a mouse to undergo further development, and then analysed using BGI’s single-cell genomic analysis. This innovative technology helped scientists to identify and isolate the target 8-cell embryo-like cells and demonstrate their ‘totipotent’ ability to create the cells involved in generating the placenta in vivo.

The advances being made by the researchers could eventually make individualized organ regeneration a reality. Typically, the only avenue available for those in need of organ transplantation is finding a matching donor. The procedure is not fool proof. Transplants can fail if the donor’s serotype is too different from the recipient. A separate procedure designed to adapt animal organs for transplantation to humans through gene editing is also in its infancy.

Research institutions involved in the study, published in Nature as "Rolling back of human pluripotent stem cells to an 8-cell embryo-like stage," include the Guangzhou Institutes of Biomedicine and Health of the Chinese Academy of Sciences, BGI-Research, University of Cambridge, Jilin University in Changqun, and University of Rajshahi from Bangladesh. The study obtained ethical clearance before it was conducted.