Shenzhen, June 16, 2022: International researchers led by China’s BGI-Research used single cell technology to study the brains of ants, explaining for the first time how the social division of labor within ant colonies reflects in the functional specialization of their brains at cellular levels.

In a study, ‘A single-cell transcriptomic atlas tracking the neural basis of division of labour in an ant superorganism’, published today in Nature Ecology and Evolution, scientists from BGI Group’s BGI-Research, Kunming Institute of Zoology, Chinese Academy of Sciences, University of Copenhagen, and others, applied BGI’s DNBeLab single cell library platform to obtain more than 200,000 single-nucleus transcriptomes from pharaoh ant brains and constructed a single-cell transcriptome map covering all adult phenotypes of this ant species: workers, males, gynes (virgin queens), and queens. 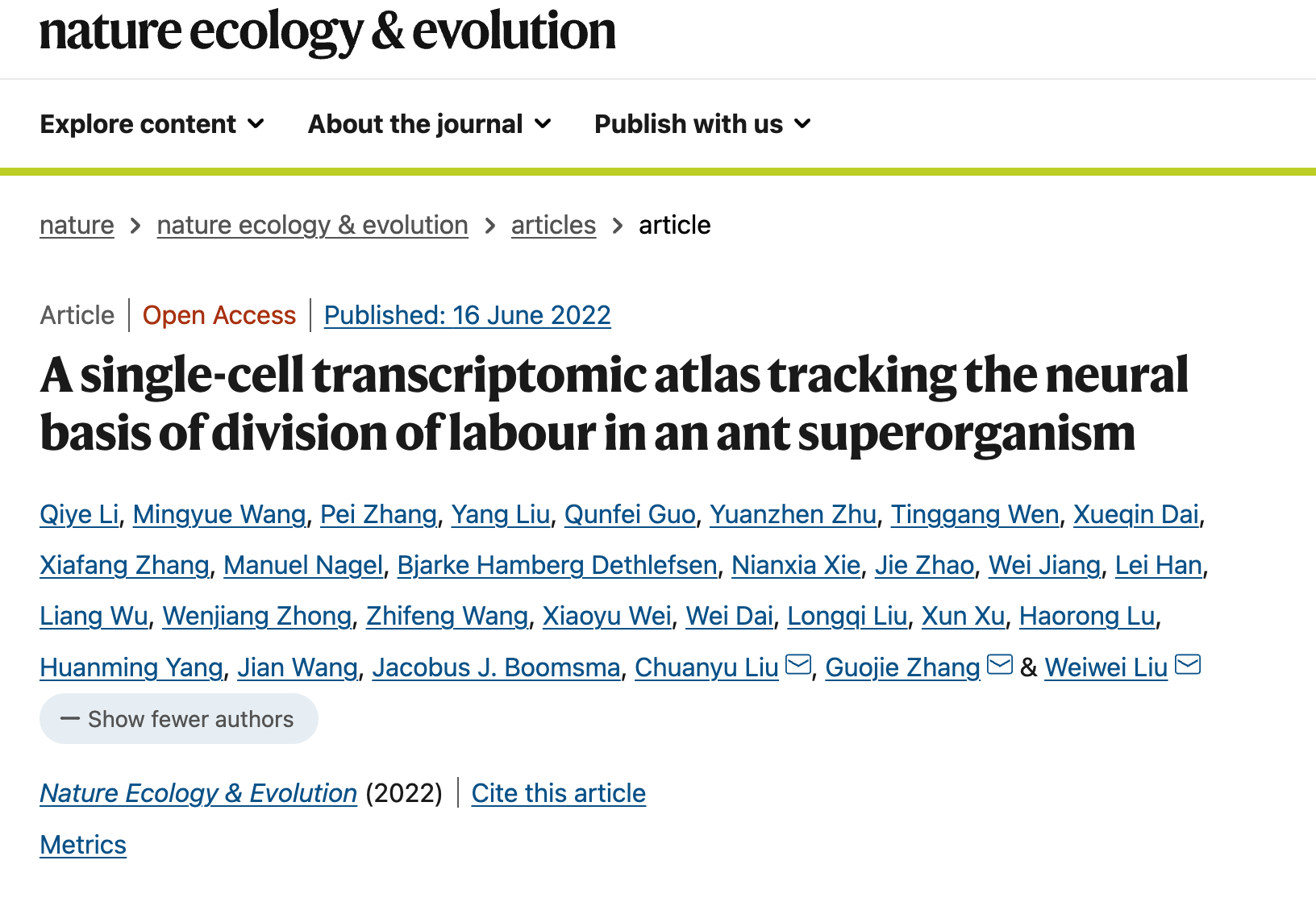 Ants are one of the most successful organisms on earth, having existed for more than 140 million years. The biomass (determined by multiplying an estimated population by its members' average weight) of ants is estimated to be similar to the biomass of humans. The success of ants is generally attributed to their remarkable social behavior with clear reproductive division of labor. Ant colonies have been conceptualized as superorganisms for more than a century. Now taking advantage of single cell technology, scientists have been able to systematically determine the celluar complexity in an ant’s brain and assess the brain cell composition difference between individuals within the same colony.

“Our discoveries suggest that functional specialization of their brains appears to be a mechanism underlying the social task division among individual ants ,” says Dr. Qiye Li, first author of the paper and researcher at BGI-Research. “We humans learn and train ourselves to do different jobs, while ants are born with a specific role in their colony.”

The research team found that the brains of worker and male ants are extremely specialized and highly complementary. The neurons responsible for learning and memory and processing olfactory information are particularly abundant in workers, while the abundance of optic lobe cells responsible for processing visual information is very low. This trend is reversed in male ant brains where there is an abundance of optic lobe cells, but fewer neurons for olfactory processing, learning and memory.

“These findings well support our observations in the laboratory that the pharaoh ant workers are responsible for all colony maintenance tasks that need multipurpose brains, while males do not take part in any colony maintenance tasks, as their only function is to find and inseminate a virgin queen.” said Dr. Weiwei Liu, researcher at the Kunming Institute of Zoology, Chinese Academy of Sciences, and co-corresponding author of the paper.

The analysis also identified significant changes in the brains of gynes as they transformed into queens after mating. For example, the abundance of optic lobe cells decreased as the queens adapted to the darkness of the nest, while dopaminergic neurons and ensheathing glia increased, which may account for the fecundity and longevity of the queens.

"This is the first single-cell atlas that covers all social roles in an ant colony. Its achievement benefits from the development of massively parallel single-cell profiling technology with high sensitivity and accuracy at a low cost." said Dr. Chuanyu Liu, co-corresponding author and researcher at BGI-Research.

By comparing the brain cells of pharaoh ant and Drosophila fruit fly, the researchers also found many conserved cell types in insect brains. For example, a population of optic lobe cells in Drosophila responsible for sensing object movement during courtship also exists in ants and is particularly abundant in males. The molecular signature and spatial location of these cells are very similar in the two distantly related insects, suggesting that these cells likely play a conserved role in regulating male mating behavior in insects regardless of sociality.

"This study helps us understand the complexity of ant brains and how the complementary specialization in brains enables ants within a colony to function as a superorganism," said Prof. Guojie Zhang, co-corresponding author from Evolutionary & Organismal Biology Research Center, School of Medicine, Zhejiang University. "The brains of different castes and sexes are specialized in different directions and complementary to each other, allowing the whole ant colony to perform the full range of functions including reproduction, brood rearing, foraging, and defense. This superorganismal life strategy has enabled ants to flourish over 140 million years of competition and finally become a highly dominant animal group on Earth."

Ethical approval was received for this research.

BGI Group, a pioneer in life sciences, is one of the world’s leading biotechnology organizations with operations covering research, production, and applications in more than 100 countries and regions. BGI Group’s work includes ground-breaking science discoveries, innovative research into microbiology and biodiversity, diagnostic testing services to trace viruses and diseases, the development of next generation technologies for large-scale gene sequencing, and the novel spatial-omics technology Stereo-seq. BGI placed 1st in Asia Pacific and 10th globally amongst corporates for high-quality scientific research papers in life sciences in the 2021 Nature Index.