首页 About News Center BGI News 21-Year Anniversary of the Completion of the Working Draft of Human Genome Sequence: The Past, Prese...
Part 1 21 Years Ago

The 20th century was the peak of human civilization in the 55 million years of its history.

The atomic bomb demonstrated the mighty power of the smallest element of our nature and told us how vulnerable the human world could be. The moon-landing pushed our frontier to a different planet and let us realize we are merely dust in the infinity of space.

But there was a spark that empowered us. It revealed a new world as it fundamentally changed the way we recognize ourselves and every living thing on earth. It taught us to be humble as it explained that humans are not much different from plants, insects, or animals. It enlightened us as it unveiled our potentials hidden in millions of years of evolution. And it decoded the secret of life and guided us to happiness, immortality, and even eternity.

This is the Human Genome Project (HGP).

So, what is a genome?

Everything about our physical selves is pre-determined by our genetic information – skin color, eye color, the softness of hair, etc. – is stored in our DNA. For any organism (including human beings), a genome consists of DNA and all genetic materials passed along from our biological parents and will pass to our children. To simply put, everything about a human being is written in genomes.

To decode and read this “book of life”, the HGP was initiated. 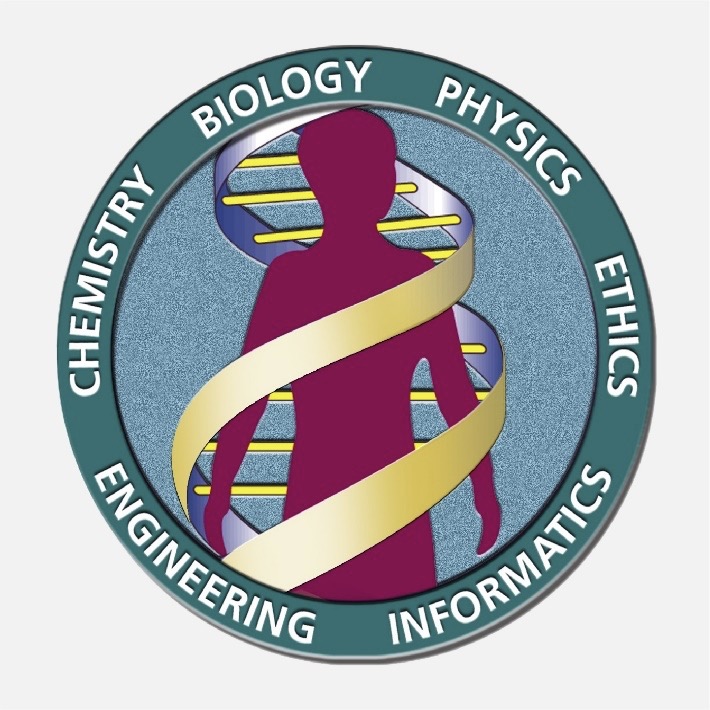 Logo of the Human Genome Project

From 1990 to 2003, over two thousand scientists and professionals of related disciplines from multiple universities and research institutes in the United States, the United Kingdom, Japan, France, Germany, and China worked closely to explore the complete set of human genes and construct the results into the complete sequence of DNA bases in the human genome. Most importantly, they made all information accessible and open to all. 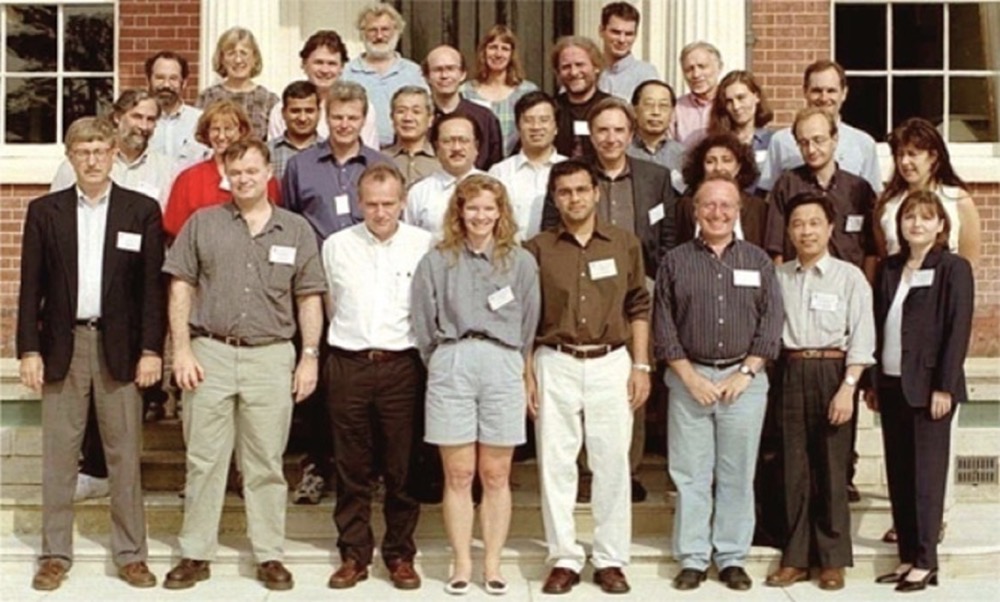 Along with the Manhattan Project and Apollo Program, HGP was cited as the greatest scientific project in the 20th century.

As the only developing country that participated in the project, China was committed to sequencing, assembly, and analysis part of the tip of the short arm of chromosome 3, which was then estimated to account for about 1% of the entire human genome. Thus, this project was called the “1% Project”, also known as the “Chinese Chapter of the Human Genome Sequence”, or the “Beijing Region” of the human genome because all the sequenced overlapping BAC (Bacterial Artificial Chromosome) clones are labeled “Beijing”.

It is hard to believe if it were not for the bold action of a bunch of enthusiastic young Chinese scientists, China would be left out from this groundbreaking international scientific collaboration in the last century – or the biggest one in human history ever since. While the mainstream Chinese scholars were still debating whether China should be part of the project, these proactive young men and women quietly started their work. They saved the spot for this ancient eastern Asian country in this global science endeavor on the new millennium.

And this ship would not sail without the effort of another institute – BGI. On 09:09:09 am, September 1999, BGI was established.

The commitment to the HGP means that China had to complete 500,000 successful Sanger sequencing reactions within six months between October 1999 and March 2000. With minimal budget, equipment, and workforce, the “1% Project” began almost from ground zero.

In a poorly refurbished laboratory, these BGI scientists were racing against the clock using simple tools working on benches made with packing boxes. Everyone took terms to look after the running of sequencers. At night shift, they put two taborets together as a bed next to the sequencer and slept on it with their coats on for few hours, waiting for the sequencing result.

BGI scientists work in the laboratory. The top sign read, "We may be poor, but we will never be defeated!” (1999)

Despite the less-than-optimal condition, all laboratorians received intensive and strict training and mastered all required skills for the sequencing task. They repeated the same sequencing procedure at least 13 times to check the accuracy of the data of merely 628Kb.

Finally, with the joint effort of all teams, the CHGC submitted 64 Mb (a million of base pairs) raw data for the human genome “draft sequence” before the announcement of the “Human Genome Draft Sequence” on 26 June 2000. CHGC also submitted 38 Mb data of high-quality “finished sequence” for the fine sequence paper on the human genome published on Nature in Oct 2004. The fine sequence of the human chromosome 3 was finally published in Nature in April 2006.

“And I'd also like to acknowledge the contributions not only that their (UK, Japan, Germany, France) scientists, but also scientists from China, made to the vast international consortium that is the Human Genome Project.” Joint by former UK Prime Minister Tony Blair via satellite connection, the then-US President Bill Clinton paid his tribute to HGP scientists, including the Chinese scientists, in the White House on June 26, 2000. "The vigorous involvement of talented colleagues in other countries, now including China, France, Germany, Japan and the United Kingdom, have made this project particularly gratifying to me.”

The butterfly effect of HGP has transcended through time and space, which significantly reshaped our lives in economy, research method, tool, field application, and more.

HGP offered numerous new markets and business opportunities around the globe, and its impact on the world's economy is unquantifiable. From 1988 to 2010, in the US alone, HGP created more than 3.8 million jobs across all 50 states, $793.3 billion total economic output, and $78.4 billion total tax revenue. For every $1 invested in the project, it has helped to generate $141 in return.

HGP enabled new research methods, which allows scientists to review human beings and other organisms from a new perspective for the first time. The discovery and cataloging of human genes provided a blueprint for human beings and transformed our understanding of human evolution. New disciplines such as proteomics are emerged based on the results of HGP which grant scientist new ways to explore the mechanism and explain the specific phenomenon of our discrete biological compartments from different angles.

Today's scientists cannot imagine conducting any biological-related research without the high-throughput sequencing technology developed by HGP. In 2008, Nature released the first complete genome sequence of acute myeloid leukemia (AML) samples. The researchers found eight new gene mutations in cancer cells by comparing them with samples of normal skin cells. This breakthrough study shows that genome sequencing can discover new gene mutations that may cause tumors, which traditional techniques may not find. This finding also provides a series of potential biological targets for future drug research.

Impact on Development of Tools and Field Application

HGP drove the development of research and testing tools. The sophisticated computational and mathematical approaches brought by computer scientists, mathematicians, engineers, theoretical physicists, and biologists in HGP paved the way for better, faster, and more comprehensive research in biology.

Twenty-one years ago, with the cost of $3.8 billion, over 2,000 world’s brightest scientists spent 13 years sequencing a person's complete genome. Today it takes only one machine in 24 hours for $500 to do the same job.

Technicians operate an MGI DNBSEQ-T7 high-throughput sequencer which can output 1-6Tb of high-quality data per day.

The advancement of genetic technology has pushed the cost of sequencing to drop faster than "Moore's Law". This development led to countless discoveries in life sciences and the coverage of large-scale genetic screening for diseases and potential genetic risks that benefit tens of millions of people.


Imagine that shortly, the screening of major diseases (such as Down’s syndrome, deafness, cervical cancer, bowel cancer, etc.) will be as simple and affordable as a COVID-19 test. By then, the focus of our healthcare can be shifted from "precision treatment" to "precision prevention", and ultimately achieve “precision health”.

And this is happening in China. With the policy and technical support, in 2012, the city of Tianjin initiated a genetic testing project for neonatal hereditary deafness. Genetic screening can detect congenital deafness and late-onset deafness early and provide patients with early diagnosis and treatment.

Between 2012 and 2019, BGI provided tests for approximately 600,000 newborns in Tianjin, with a coverage rate of over 70%. Many of the newborns were saved from late-onset or drug-induced deafness. This project reduced the number of students in Tianjin School for the Deaf by 80%.

HGP brought an all-new research pattern by presenting the power and necessity of integrating disciplines, or "big science". It conveyed a clear message that biological and technological research efforts can be integrated to tangle complicated subject in biology.

Also, advanced sequencing technology offers data in a considerable quantity that no one has ever imagined before. A new “big-data-driven” research pattern is quietly revolutionizing the mainstream hypothesis-driven research pattern. Until now, most people, including scientists, are still in the process of understanding and accept the importance and far-reaching significance of this change.

What does it look like in the next 21 years? Though there is yet to have a concrete answer to this question (or perhaps there will not be one), it will not hurt to make predictions from where we stand today.

Accessible genome sequencing will fundamentally change our social system. With the dropping price of personal genome sequencing, soon we will be able to sequence everyone and have it as an essential social service, like issuing a citizen ID. And this – sequencing all human beings - will become the biggest biological, social, and technical project in human history.

The data, or Personal Digital Genomes will be stored in a secured data center or bio-information center permanently as non-renewable precious biomedical information. Together with Digital Healthcare System and Digital Life System, we can manage our health and life condition throughout the whole life cycle.

The creation and adoption of this project will change the current biomedical research, healthcare system and even changes the integration of medical insurance, social insurance, life insurance, pension, and nursing care.

With the data in hand, the scientific research will no longer take ten or one hundred people as samples, but 10,000 or one million. Also, medical research will not take disease diagnosis as the starting point but based on preclinical symptoms and health assessment.

Inspired by the HGP, scientists were set to explore a more prominent target – our planet earth. Together with BGI, scientists from multiple countries join to initiate the Earth BioGenome Project. Launched on November 1, 2018, this project aims to sequence and catalog the genomes of all of earth's currently described eukaryotic species over ten years.

With all the animals, plants, microorganisms, fungi, and people on the earth are sequenced, our knowledge of zoonotic diseases (such as SARS, hydatid disease, etc.), gene "drift" between plants and soil, and more will never be the same. Humans will be able to review ourselves in a broader spectrum and digitally connect with every organism to form the “Internet of Lives”.


HGP is the end of a beginning. It waged a conquest to the unknown and started a voyage to the promised land, where “our children's children will know the term cancer only as a constellation of stars.”


“In coming years, doctors increasingly will be able to cure diseases like Alzheimer's, Parkinson's, diabetes and cancer by attacking their genetic roots … In fact, it is now conceivable that our children's children will know the term cancer only as a constellation of stars.”